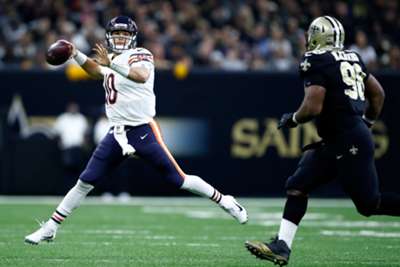 Making his first NFL start Sunday since dislocating his non-throwing shoulder last month, Trubisky struggled as the Bears went down 36-25 to the Saints.

At one point late in the fourth quarter, Trubisky was 20 for 35 for 119 yards, before padding his final stats on two late scoring drives after the game was out of hand.

But despite Trubisky's issues, Nagy said he never considered benching him for backup Chase Daniel – who filled in as the starter while Trubisky was injured.

"Because there's just so many parts of it," Nagy said. "And Mitch is a competitor, and I think for all of us, it just was one of those deals where you would love — you would really love it to be able to get the run game going early, early, early so you can do more things, and we didn't do that."

Bears fans on social media were brutal to Trubisky during and after the game.

After a Pro Bowl season last year, Trubisky appears to have taken a step back this term. It does not help matters that, as the second overall pick in 2017, he will forever be compared to the two quarterbacks (Patrick Mahomes and Deshaun Watson) taken after him in the first round that same year.

When a reporter asked Nagy if he is still committed to his young quarterback, he responded, "Yeah. Absolutely, yeah."

Nagy was quick to point out that Chicago's struggles were a team effort on Sunday. Bears rushers gained only 17 yards on seven carries, the fewest in franchise history.

"I mean, right now we have no identity," Trubisky said. "We're just searching. We don't have any rhythm. We're not the offense we were last year, and every year is different, every game is different. We've just got to find ways, look within ourselves, and we've got to have guys step up."