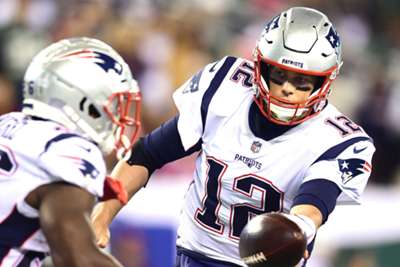 The New England Patriots started fast on Monday to coast to a 33-0 rout of the New York Jets and remain undefeated.

New England, off to their third 7-0 start in history, completed a season sweep of the Jets, who dropped to 1-5, and again did not concede a single point.

Tom Brady was up to his usual tricks, New England's defense played lights out and Sam Darnold had a disappointing follow-up after returning as the Jets quarterback a week ago.

What else can you say about Tom Brady?

At this point in his career it is clockwork. Brady continuously defies the odds when he steps onto the field and comes away with easy wins as he did on Monday.

He was near perfect, throwing one interception, but the veteran quarterback brushed it off and kept the offense rolling.

Brady finished 31-of-45 passing for 249 yards and one touchdown. He did not lead a balanced attack with 249 passing yards to 74 rushing, but he did look to running back Sony Michel for a bulk of the team's scores once they were deep in the red zone.

We already know Brady is reliable under center, but New England's defense have turned a tide since coach Bill Belichick assumed the role as coordinator. The mastermind has helped put together the league's best defensive unit in nearly every category.

The Patriots' defense entered the game with as many touchdowns (three) as they have allowed through six games. They are also allowing just 6.9 points per game.

It was an obvious mismatch against the lowly Jets on paper, but it was made more apparent come game time.

Ain't no party like a @Patriots pick party. @_Showtime29 #GoPats

There is an argument that New England have not had a true test. A fact that may remain until the Patriots' match-up with the Baltimore Ravens in two weeks. If the defense continues to steamroll lesser sides, it should be primed for another big performance against a tougher offense.

It was unfair of the football gods to have this match-up on the calendar at this time. No one could have foreseen Darnold coming down with mono but when he did return last week, he played well.

Darnold entered the Week 7 matchup with the Patriots off one of the best performances of his young career. In the Jets' first win of the season, a 24-22 victory over the Dallas Cowboys, the second-year signal caller finished with a 71.9 per cent completion rate, 338 yards, two touchdowns and one interception.

It was a much different story this time around.

He opened the game with horrible decision making that led to an early pick and he never recovered.

15th interception for the @Patriots defense this season!

Devin McCourty gets his 5th pick on the year. @McCourtyTwins #GoPats #MNF

Darnold finished 11-of-32 passing for 73 yards, no touchdowns and the four interceptions.