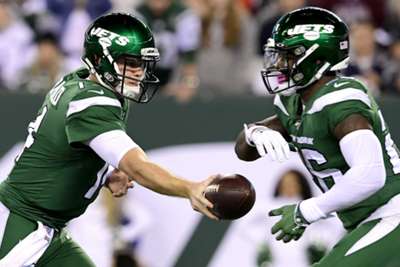 Le'Veon Bell came to the defence of Sam Darnold after the New York Jets quarterback was heard saying he was "seeing ghosts" during their shutout loss to the New England Patriots.

Darnold's remarks were aired during ESPN's broadcast of the 33-0 defeat at MetLife Stadium, for which the quarterback was mic'd up.

He was seen sitting on the bench saying "I'm seeing ghosts" in a game that saw him commit five turnovers.

Running back Bell said the NFL "screwed Sammy over" and that airing a sideline comment like that had never happened to another quarterback.

"The NFL screwed Sammy over ... there's not one player in the NFL who's cool with having every sideline convo broadcasted to millions...there's a reason we've never heard other QBs frustrated on the sideline like that before... that's crazy, @NFL did Sam dirty as hell," Bell wrote on Twitter on Tuesday.

The NFL screwed Sammy over...there’s not one player in the NFL who’s cool with having every sideline convo broadcasted to millions...there’s a reason we’ve never heard other QB’s frustrated on the sideline like that before...that’s crazy, @NFL did Sam dirty as hell https://t.co/2XmYXNTNoL

According to the New York Daily News , the NFL needs to have an on-site NFL Films representative clear any comments aired. Not only did the representative clear this particular comment from Darnold, but ESPN — which has the right not to use content cleared — also decided to air it on the "Monday Night Football" broadcast.

"We'll be looking into that pretty hard," Jets coach Adam Gase said on Tuesday when asked about the airing of Darnold's comments.

"That was one of those things that was really disappointing to hear about after the game. I don't know if I've ever seen that where somebody that was mic'd up was basically … a comment like that was allowed to be aired. It bothers me. It bothers the organisation. Obviously, we're going to be looking hard into our co-operation going forward."

NFL coaches and quarterbacks have to be mic'd up for one game a season, per NFL Films' deal with teams. Originally, Darnold was going to be mic'd up for the Week 2 game against the Cleveland Browns, but he was ruled out of the contest.

"It's not something's that new," Gase said. "Usually when it's a Monday night game, somebody's usually mic'd up. I know once a year I have to do the same thing. It’s kind of part of the deal.

"Obviously, you're never anticipating something like that happening. The fact that it did just gives us pause to really co-operate anymore. Because I don't know how we can allow our franchise quarterback to be put out there like that."