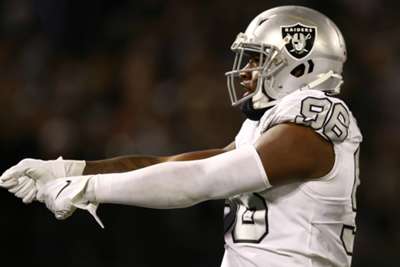 Jon Gruden revelled in a "signature game" from Clelin Ferrell as the Oakland Raiders won a dramatic AFC West contest against the Los Angeles Chargers.

The Raiders' defense came to the fore in a 26-24 home win on Thursday, a second straight victory moving Gruden's squad to 5-4 for the season and keeping them in the playoff hunt.

Ferrell was a surprise selection at number four overall in the 2019 NFL Draft and had only registered one sack – in Week 1 – in his first seven games.

But he exploded for 2.5 sacks on Philip Rivers, who was taken down five times, fumbled once and threw three interceptions – two of which were made by Erik Harris - after being harassed all evening.

Nothing better than Gruden with the @Raiders fans after a win #RaiderNation pic.twitter.com/6bTSPhQbAh

Gruden feels Ferrell's moment in the spotlight was long overdue based on his performances in the first half of the season.

"Sack totals are driving me nuts - he does a lot more than just rush the passer," Gruden said of Ferrell, who had five total pressures as well as eight combined tackles.

"He made some great plays against the run. It was a signature game for him, obviously, but it's great for him to get some sacks.

"Any time you play a great quarterback like Philip Rivers or [Matthew] Stafford or any of these guys, if you let 'em stand back there you're in trouble. I thought we had a good rush, great energy.

"We were short-handed, we didn't have [Josh] Mauro, Arden Key broke his foot, we only had seven D-linemen. I credit [defensive co-ordinator] Paul Guenther, he did a hell of a job with the scheme. Really good work.

"Cle Ferrell and the pass rush showed up and you can't say enough about Erik Harris and the secondary."

The kids are alright.

Maxx Crosby also shone as he racked up 10 pressures, the most of any Raiders defender since 2016, prompting Ferrell to give the duo a nickname.

And Crosby added: "A lot of people have been doubting us and we just have been working every single day. It was great, we just got to keep doing it every single week.

"Rivers is a great quarterback and the thing with him is you got to be in his face all game and try to get him flustered. We just kept coming all game until the final whistle blew – it was a big win."