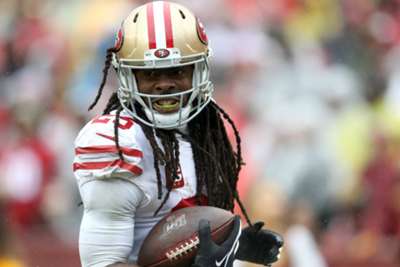 Bobby Wagner is eager to ensure Richard Sherman will not be in a celebratory mood after the Seattle Seahawks have taken on the San Francisco 49ers in a crunch NFC West clash on Monday.

Two of the NFL's top teams will do battle at Levi's Stadium as the 8-0 49ers meet their chief rivals the Seahawks, who are also impressing at 7-2.

Cornerback Sherman spent seven years with the Seahawks before an acrimonious departure and subsequent move to their divisional foes, who have stunned the league with their unbeaten start.

While he remains on good terms with his former team-mate, Wagner noted how much Sherman enjoyed winning the 49ers' home game against his side last season and wants to avoid similar scenario.

"I don't know if it still bothers him or not, but he'll make it bother him before the game – he'll find a way," Wagner told NBC Sports Bay Area of Sherman's Seahawks exit.

"Maybe I'll help give him some more stuff to help bother him before the game.

"I'm pretty sure he wants to beat us. I'm not saying that he sat there and marked this game on his calendar but, when it comes up, you know that he wants to win down there."

Of last year's 26-23 home win for the 49ers, which ended the Seahawks' 10-match winning streak in the rivalry, Wagner added: "Look at how he was the last game that they won down there, he was pretty excited about it. I'll try to make sure he's not excited this week."

Sherman did not register an interception and had just four passes defended in 14 games last season, but he already has three picks and eight pass break ups in eight games this year as part of a stifling Niners defense.

Seahawks coach Pete Carroll praised Sherman's form ahead of the game and Wagner has also been impressed, though he could not resist a jibe at his friend's expense.

Wagner added: "He looks great, coming back to his old self. He got a couple picks, he ran one back.

"He almost got caught when he ran it back. He almost fumbled it too. We've got to talk to him about that!

"We'll talk a little trash during the game and then when he comes back I make him buy me food. That sort of the thing - whoever loses has to get the food."