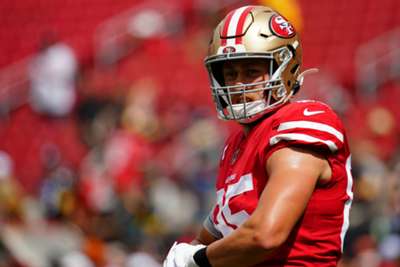 George Kittle is doubtful to feature for the San Francisco 49ers as they put their unbeaten record on the line in Monday's big NFC West clash with the Seattle Seahawks.

The Niners (8-0) are the last remaining unbeaten team in the NFL this season but face a tough test against dangerous division rivals the Seahawks (7-2) at Levi's Stadium in Week 10.

And San Francisco may be without tight end Kittle, who is struggling with knee and ankle injuries.

Kittle, who has 46 receptions for 541 yards and two touchdowns in an outstanding season, did not practice on Friday, and head coach Kyle Shanahan revealed any other player might have been ruled out given his injuries.

"Just because it's George [he is doubtful]," Shanahan told a news conference. "If it was any other player, I'd probably say he's out. And if it goes like this, he will be out.

"He's doing everything he can and we'll see how he feels on Monday."

Kittle was forced to miss part of the fourth quarter against the Arizona Cardinals last week after appearing to bang his knee early in another impressive performance.