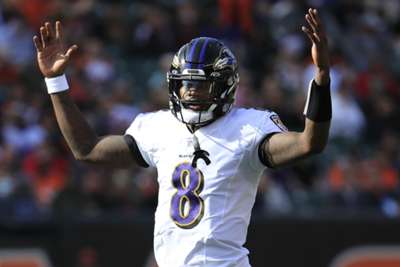 Lamar Jackson enhanced his MVP bid with his second perfect passer rating of the season as the Baltimore Ravens crushed the Cincinnati Bengals 49-13 in Week 10 of the NFL season.

Patrick Mahomes, the reigning MVP, was unable to lead the Kansas City Chiefs past the Tennessee Titans, despite throwing for over 400 yards in his return from a dislocated kneecap.

Elsewhere, the Atlanta Falcons claimed a shock win over the New Orleans Saints in Louisiana, while  the Jets claimed New York bragging rights over the Giants.

Baltimore, fresh from handing the New England Patriots their first loss last week, moved to 7-2 with a 49-13 annihilation of the winless Bengals.

Ravens quarterback Jackson once again impressed, completing 15 of 17 passes and tossing three scores, while ripping off a 47-yard touchdown run too.

Ryan Finley was making his NFL debut after the Bengals benched Andy Dalton, but the quarterback managed just 167 yards through the air and saw an interception returned to the house by Marcus Peters.

TITANS SNEAK PAST CHIEFS AS MAHOMES IMPRESSES ON RETURN

The Chiefs had Mahomes back from a two-game absence on Sunday and though he threw for 446 yards, it came in a losing cause as the Titans upset Kansas City in Nashville.

Tyreek Hill had 157 receiving yards and a score as the Chiefs put up 530 yards of offense, but Derrick Henry had 188 yards and two scores on the ground for Tennessee, who went ahead with 23 seconds remaining through Adam Humphries' 23-yard catch.

Kansas City lined up for a field goal that would have forced overtime, yet Harrison Butker's attempt was blocked.

The Falcons picked up just their second win of the season, while the Saints suffered only their second loss as Dan Quinn's team claimed a 26-9 triumph on the road, kicker Younghoe Koo making four field goals on his Atlanta debut.

Daniel Jones threw four touchdowns but the Giants lost 34-27 to the Jets in the clash between the two New York teams, while the Cleveland Browns beat the Buffalo Bills 19-16 and the Tampa Bay Buccaneers claimed a 30-27 success over the Arizona Cardinals.

Matthew Stafford's streak of 136 successive starts came to an end as the Detroit Lions, for whom Jeff Driskel played at quarterback instead, were beaten 20-13 by the Chicago Bears.