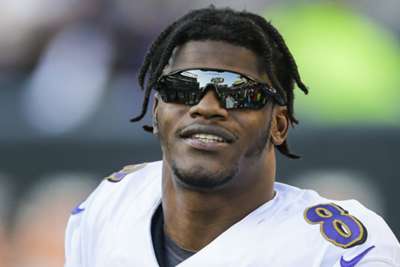 Lamar Jackson starred for the Baltimore Ravens again on Sunday, joining Ben Roethlisberger as the only quarterbacks to have multiple games with perfect passer ratings in the same season.

Second-year passer Jackson completed 15 of his 17 pass attempts for 223 yards and three touchdowns as the Ravens routed the winless Cincinnati Bengals 49-13 to improve to 7-2 at the top of the AFC North.

It was the second time this season Jackson had returned a perfect passer rating of 158.3 as he followed up his big day against the Miami Dolphins in Week 1.

The only other quarterback to have more than one perfect passer rating in a season was Pittsburgh Steelers signal caller Roethlisberger, who had two in 2007.

Critics questioned whether Jackson would be able to succeed as a pocket passer in the NFL but through 10 weeks he is one of the leading contenders for the MVP award.

"I'm a quarterback at the end of the day and I want to prove that each and every day," Jackson told reporters.

"If I don't complete a pass in practice, I'm ticked off."

Lamar Jackson completed each of his first 10 passes today against Cincinnati. That ties Joe Flacco in 2012 for the most consecutive completions to start a game in @Ravens franchise history.#RavensFlock

Jackson also led the Ravens in rushing, accumulating 65 yards on the ground, including a 47-yard score.

"That's rare. That was special."