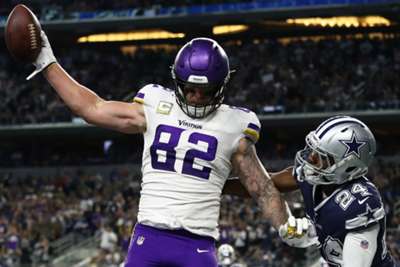 Kyle Rudolph produced a highlight-reel moment as the Minnesota Vikings trumped the Dallas Cowboys, while the Green Bay Packers saw off the Carolina Panthers.

Rudolph scored with a one-handed catch during Sunday's 28-24 win over the Cowboys in Week 10 of the NFL season.

The Packers benefited from an Aaron Jones hat-trick as they beat the Panthers 24-16, while the Pittsburgh Steelers and Miami Dolphins also won.

In Prime Time and under the Arlington lights, the Vikings beat a winning team on the road for the first time in almost two years, having gone 10 games without success.

Dalvin Cook ran for 97 yards, including the decisive touchdown on fourth down, and Kirk Cousins threw for two TDs – both to Rudolph.

Cowboys star Dak Prescott had 397 yards and three touchdowns as Dallas (5-4) fell into a tie for first place with the Philadelphia Eagles in the NFC East.

JONES INSPIRES PACKERS IN THE SNOW

Jones scored three touchdowns as the Packers proved too strong for the Panthers on a snowy Sunday at Lambeau Field.

For the second time this season, Jones had a hat-trick of TDs – becoming the first Green Bay running back since Jim Taylor in 1962 with multi three-touchdown games in a season.

MVP candidate and Panthers star Christian McCaffrey was stopped by Preston Smith and the Packers (8-2) at the goal line as time expired.

"We all know that Christian is a very talented player, and he's been mentioned in the MVP race. So maybe it's time to start talking about Aaron Jones," said Packers quarterback Aaron Rodgers, who completed 17 of 29 passes for 233 yards, including 118 yards to Devante Adams.

Carolina's McCaffrey had 108 yards and a touchdown on 20 carries for the Panthers, who dropped to 5-4.

SILENCE OF THE RAMS AS STEELERS HOLD FIRM

The Steelers extended their winning streak to four games by edging the Rams 17-12 in Pittsburgh.

Pittsburgh forced four turnovers, while the Rams converted just one of 14 third downs in a performance that yielded a lone touchdown.

Steelers quarterback Mason Rudolph – who became the ninth QB since the 1970 merger to throw a touchdown in each of his first seven games – finished with 22 of 38 passes for 242 yards and a TD.

The Dolphins started the season with seven straight defeats, but Miami are riding some momentum after upstaging the Colts 16-12.

Miami claimed back-to-back victories by capitalising on the Colts' (5-4) turnovers – converting three turnovers into 13 points on the road in Indianapolis.

Ryan Fitzpatrick scrambled for an 11-yard touchdown run as Miami (2-7) posted their first away success since September 2018.

"We are starting to come together," said Dolphins head coach Brian Flores. "I think being able to overcome adversity is part of playing in the National Football League. We're starting to do that at a higher level now."

It was a forgettable outing for struggling Colts kicker Adam Vinatieri, who missed another extra point that ruined a chance for Indianapolis to kick a field goal to send the game into overtime.

Colts coach Frank Reich said: "We've been committed to [Vinatieri]. We're going to always evaluate. Everybody gets measured. Everybody is held accountable, from top to bottom. That's always the case. Nothing meant to read into that. That's the reality of the business. There's been no discussions about that between [general manager] Chris [Ballard] and I. That's just the business."