Rodgers: Jones should be in NFL MVP conversation 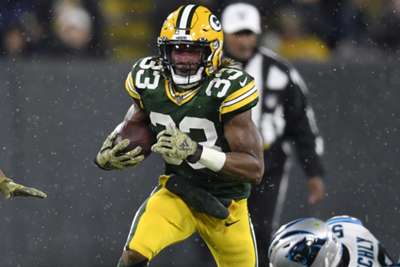 Aaron Jones deserves to be talked about in the conversation around the NFL MVP, according to Green Bay Packers team-mate Aaron Rodgers.

Jones rushed for three touchdowns as the Packers improved to 8-2 thanks to a 24-16 win over the Carolina Panthers on Sunday.

The 24-year-old running back has scored 14 TDs this season and Rodgers said Jones should be among those considered for the MVP award.

"I know that Christian [McCaffrey, Panthers running back] is a very talented player and he's been mentioned in the MVP race," the Packers quarterback told a news conference.

"Maybe it's time to start talking about Aaron Jones."

Rodgers, 35, urged his team-mates to recognise the opportunity ahead of them this season.

"I was just talking with Jimmy [Graham], I know you guys don't get to talk to him a whole lot, but I will share this," he said.

"We're both pretty excited about the opportunity, being older players, just understanding how special this feels and it doesn't happen like this all the time.

"We've both been through rough seasons over the years where you're just not quite in the mix and this feels different.

"Hopefully those guys understand how important the opportunity is and not do anything stupid that's going to jeopardise their role in that opportunity."