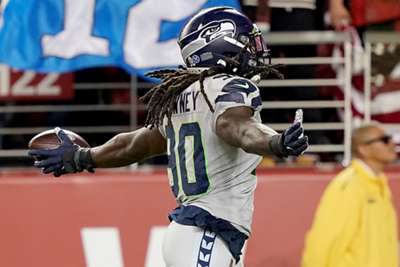 Russell Wilson credited a starring performance from Jadeveon Clowney after the Seattle Seahawks defeated the San Francisco 49ers in a game he described as the "craziest" of his NFL career.

The Seahawks won a thrilling contest on the road against their NFC West rivals 27-24 as time expired in overtime courtesy of a 42-yard field goal from Jason Myers.

A chaotic Monday Night Football encounter saw the two teams combine for seven turnovers, while Chase McLaughlin missed a 47-yard kick that would have given the 49ers victory.

Wilson and his team-mates could barely believe what had transpired as they moved to 8-2 and handed the Niners (8-1) a first defeat of the season.

But the exploits of Clowney, who produced a season-high 12 pressures including five QB hits, a sack and a forced fumble, were central to Wilson's thoughts.

The former Houston Texans star, who joined the Seahawks in an August trade, also had a defensive touchdown.

"Clowney was playing lights out - that's why we got him," said MVP candidate Wilson.

"The plays he was making were incredible. He has been a force throughout his whole career and to have him on our football team is great.

"He was talking it up on the sidelines and focused. We were all together and he was one of the main leaders in that."

Of the Hawks' victory, he added: "That was the craziest game I've ever been a part of.

Clowney himself explained Seattle's defensive line had been keen to make a point after taking criticism in the first half of the season, while the Niners' unit, led by Nick Bosa, had received rave reviews.

He said: "Up front we've been getting hammered all season long about this front not playing well.

"We needed to do a little something different. All week long I said in my head, 'We've got to out-do their D-line'.

"If you ain't competing, you need to retire. It's all about competing at the end of the day and I don't want to be outperformed by anybody."

And he echoed Wilson by adding: "There was so much going on. This was the craziest game of my career, hands down."

What a night for the @Seahawks! #Seahawks pic.twitter.com/B1UwKjJSaZ