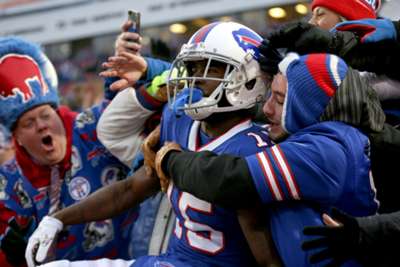 The Buffalo Bills can take another step towards the play-offs on Thanksgiving Day, while the San Francisco 49ers' clash with the Baltimore Ravens is among the standout Week 13 NFL match-ups.

Buffalo are 8-3 after back-to-back wins over the Miami Dolphins and the Denver Broncos and can make it a happy holiday for their supporters with another victory on the road against the Dallas Cowboys.

The struggling Detroit Lions host the Chicago Bears in the first Thanksgiving Day showdown, with NFL South leaders the New Orleans Saints making a trip to take on bottom side the Atlanta Falcons later in the day.

Baltimore will be out to inflict just a second defeat on the rampant Niners on Sunday before the New England Patriots come up against AFC South front-runners the Houston Texans.

We take a look at the Week 13 schedule using Stats Perform data.

- This is the 180th meeting between the Bears and Lions and the 18th on Thanksgiving Day. The Bears have won the past three meetings and are looking to win four in a row against Detroit for the first time since 2008-10 (six straight wins).

- The Lions started the season 2-0-1 but have lost seven of their past eight games and four in a row.

- The Cowboys were held to their season-low point total in Sunday's 13-9 defeat against the Patriots.

- The Saints have a league-low seven turnovers this season; the fewest they have ever had in a full season was 16 in 2018.

- The Saints have not allowed an opposing player to rush for 100 yards in 33 straight games, the longest active streak in the NFL.

- The Falcons are looking to halt a four-game home losing streak, their longest since dropping their final four home matches of the 2006 season and the 2007 home opener.

- The Colts won the first meeting with the Titans this year 19-17 in Tennessee back in Week 2. Indianapolis have won three straight meetings with Tennessee and 14 of the past 16.

- The Titans started the season 2-4, but have won four of their five most recent matches to get right back into the playoff race.

- The Bengals have won their past two games against the Jets, in 2013 and 2016, both with Andy Dalton at the helm. Dalton has thrown for 691 yards and six touchdowns across those two games.

- New York have held their past three opponents to under 300 yards of total offense, the longest active streak in the NFL and the Jets' most impressive run since 2015 - three straight games.

- The Redskins have lost their four most recent road games against the Panthers. No team has ever lost five straight matches at Carolina since the franchise began in 1995.

- Washington have scored fewer than 20 points in nine straight games, the longest streak by any NFL team since the Cardinals had a nine-game run in 2012

- These teams have met five times in the regular season, and once in Super Bowl XLVII. Baltimore hold a 4-2 edge from those matches.

- The 49ers beat the Packers 37-8 at home on Sunday - their fourth win by 24 or more points this season. That is tied for their second-most in franchise history.

- Baltimore beat the Rams 45-6 in Los Angeles on Monday and have now won three successive games by at least 34 points.

- The Jaguars lost to the Titans 42-20 in Tennessee on Sunday and have been beaten in three consecutive games by 20+ points for the first time in franchise history.

- Leonard Fournette has accounted for all three of Jacksonville's rushing touchdowns this season, the only player in the league with all of his team's rushing TDs.

- Buccaneers quarterback Jameis Winston had three touchdown passes and two interceptions in a 35-22 win over the Falcons last weekend, his second consecutive game with at least two of each and third in total this season.

- The Packers and Giants last played in the wild-card Round in January 2017 when Green Bay beat New York 38-13. The Giants have won the past two meetings at the Meadowlands after dropping their previous four home games against the Packers.

- Green Bay have lost two of their past three games after going 7-1 to start the season, both defeats coming on the road.

- New York have lost seven straight matches after winning two in a row in Weeks 3 and 4. The Giants have not had an eight-game losing streak in a single season since 2004.

- The Eagles lost 17-9 at home to the Seahawks on Sunday and now have had three games this season scoring 10 points or fewer - including each of their past two.

- The Dolphins went down 41-24 to the Browns last weekend, but they have now scored 20+ points in four of their past six games after failing to do so in any of their first five.

- Carson Wentz was sacked three times by the Seahawks, the fifth straight game in which he has been taken down at least three times - tied for the longest streak in the league this season.

- The Steelers have won 15 straight home games against the Browns, the longest active streak in the NFL and tied for the fourth-longest home winning run by any team against any opponent all-time.

- After starting the season 2-6, the Browns have won three consecutive games. They have only won four in a row once since the franchise was resurrected and that was a decade ago.

- Pittsburgh have committed a turnover in 18 straight games, tying the team's longest such streak under Mike Tomlin (2008-09).

- The Rams have won four in a row against the Cardinals, their longest run in the match-up since reeling off five on the bounce from November 2002-September 2004.

- Jared Goff completed 70.3 per cent of his passes in his team's loss to Baltimore on Monday, but threw two interceptions and averaged just 5.73 yards per attempt.

- The Cardinals have stopped 39 rushing plays for negative yardage, second most in the NFL this season to the Jets (42, excludes kneel downs).

- The Broncos have won four of the last five games at home to the Chargers, outgaining them in total offense 388.6-303.4 on average.

- The Chargers are the first team in NFL history to lose at least seven of their first 11 games with all of the defeats coming by seven points or fewer.

- Patrick Mahomes has thrown 69 career touchdown passes in 26 games. With one touchdown pass on Sunday, he will become the fastest player in NFL history to reach 70. Dan Marino reached that tally in his 29th match.

- Oakland's five losses this season have been by an average of 18.0 points; the only team in the NFL with a larger average margin of defeat this term is the Dolphins (21.7).

- The Chiefs have won six consecutive home games against the Raiders. Kansas City's average margin of victory in those six games is 15.3 points per game.

- The Patriots are 8-1 versus the Texans in the regular season, including wins in each of the past six meetings. The only team that New England have a longer active win streak against is the Jets (eight).

- In his past five starts against the Texans, Tom Brady has averaged 309.6 passing yards per game with 16 touchdown passes to just two interceptions.

- The Vikings have won two games in a row and six of their past seven dating back to Week 5.

- Over his five most recent games, Kirk Cousins has thrown for 12 touchdown passes and zero interceptions. Cousins has a 7.0 touchdown-interception ratio (21/3) for the season, on pace to be the highest single-season mark in franchise history. Brett Favre holds the current record: 4.7 TD/INT in 2009.