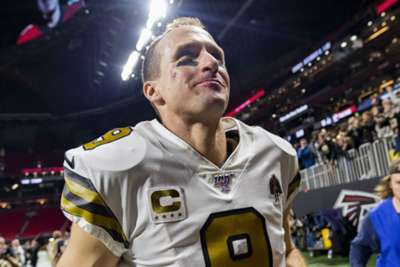 The New Orleans Saints have "bigger fish to fry" after clinching the NFC South championship on Thursday, according to quarterback Drew Brees.

A 26-18 triumph over the Atlanta Falcons on Thanksgiving Day made the Saints the first team to secure a spot in the postseason and avenged a surprise 26-9 loss to the same team at the Superdome in Week 10.

Taysom Hill blocked a punt to set up a three-yard touchdown catch for the opening score, before adding a 30-yard run in the second quarter as the Saints improved to 10-2.

"Three NFC South championships in a row, and this one being the earliest we've been able to secure it, on Thanksgiving, says a lot about our organisation," said Brees, who finished 18 of 30 for 184 yards, a touchdown and no interceptions against the Falcons.

Asked about the players celebrating the title in t-shirts stating "the south is not enough", Brees responded: "This was objective number one, obviously, win the division.

"But I think you know our mindset and the group of guys we have in there, and just kind of how we've progressed each and every year. We've got bigger fish to fry, so to speak.

"We've got a list of goals and objectives and we want to knock them down one by one, but let's keep it simple right now. Let's just focus on playing our best football. I still think it's out there, on both sides of the ball.

"If we continue to do that and get better every week we'll be peaking at the right time."

Head coach Sean Payton said: "Look, it doesn't happen much before Thanksgiving. This is our sixth [division title] now, third in a row. It's one of the goals, and for it to happen this early, it's the first step.

"You know, a lot of work goes into putting the right team together. And it's a challenging business. It's all worth it when you win and you have a chance and you're playing for something."