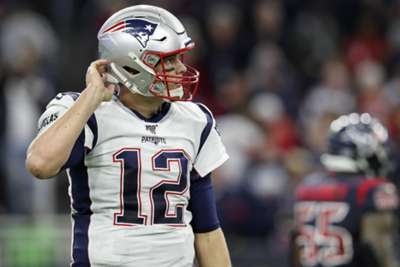 Tom Brady conceded the New England Patriots are still "battling" to find their best form after going down to a 28-22 defeat against the Houston Texans.

Sunday's road loss dropped the Patriots to 10-2, just one game clear of the 9-3 Buffalo Bills in the AFC East and giving them the same record as the Baltimore Ravens in the race to be number one seed.

The offense was again a concern for New England, with Brady completing just 24 of his 47 passes, though he did finish with three touchdowns and one interception.

Having trailed 21-3 and 28-9 before the Pats made it closer in the latter stages against Houston (8-4), Brady acknowledged the team had to get better before a huge Week 14 home game against Patrick Mahomes and the Kansas City Chiefs (8-4).

"Just execution, [we've] got to do a better job," Brady said of the loss.

"Tough to get behind and come back. We just put ourselves in a pretty deep hole and you can't do that on the road. We didn't get the job done.

"We're all trying to do a good job out there, and give them [Houston] credit, they played well.

"So, you can make a bunch of predictions and so forth, but that's not what it's about. It's about going out there and doing it.

"All remains to be seen. We'll see if we can build on it and do better next week.

"Let's see if we can get to a good place and put ourselves in a good position. We've got a tough one this week. It's a long flight home. We'll try to get ready and get back at it."

"That’s the GOAT. Before he hangs it up, I had to at least get one.” - @DeshaunWatson on @TomBrady pic.twitter.com/JXD2W8ErUV

Coach Bill Belichick was similarly unsatisfied by the Patriots' performance, saying: "It just wasn't good enough in any area and they were the better team. Pretty much sums it up.

"We [have] all got to do a better job. We gave up 28 points. We've got to perform better. Got to coach better, got to play better. In the first half, it just wasn't good enough in any phase of the game.