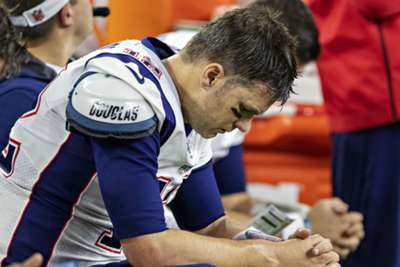 Tom Brady admitted the New England Patriots offense is "learning as we go" after the reigning Super Bowl champions fell to a 28-22 loss to the Houston Texans on Sunday.

New England lost just their second game this season, but there are wider concerns over their misfiring offense, which is ranked 14th in yards gained - their lowest ranking since the 2003 season.

Having lost tight end Rob Gronkowski to retirement after their Super Bowl LIII win in February, Brady has struggled to find a consistent receiver outside of Julian Edelman, with Antonio Brown released after just 11 days, Josh Gordon jettisoned in October and Mohamed Sanu battling injuries since he was acquired.

The Pats' rushing attack - ranked 21st in the NFL - has also struggled behind a less-than-stellar offensive line and three-time MVP Brady suggested there are several factors behind their offensive struggles.

"But at the same time, I think there are realistic expectations with our circumstances and incorporating different elements and players and injuries."

#Patriots struggle on both sides of the ball as they fall to 10-2 in Houston.

New England are now the second seed in the AFC behind the Baltimore Ravens and a loss to the Kansas City Chiefs on Sunday would also harm their hopes of securing a first-round bye in the playoffs.

"It's not like we haven't dealt with losses before," Brady added.

"I think a lot of it is about mental toughness and realising that when you don't play well, you're not supposed to win.

"You're not supposed to win when you put less than your best out there. Sometimes you get away with it. Most of the time you don't.