Jerry Jones: Jason Garrett will be coaching in the NFL next year 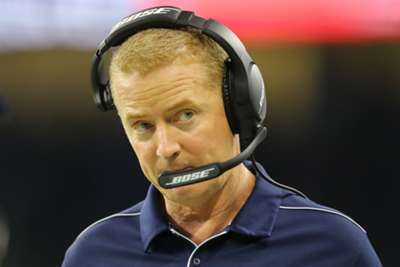 Jerry Jones believes Jason Garrett will be coaching "in the NFL next year" as speculation over his future with the Dallas Cowboys continues.

Garrett's position has been the subject of increasing scrutiny as the Cowboys have suffered successive defeats to the New England Patriots and Buffalo Bills, dropping them to 6-6, though they still lead the NFC East.

Cowboys owner Jones has insisted Garrett will not be removed from his post this season but, in an interview with sports radio station 105.3 The Fan, stopped short of saying he would be with Dallas in 2020.

"Nobody has the exclusive skills to get the job done so that collectively you can win a Super Bowl. But there are qualified people," Jones said.

Asked why he is against firing 53-year-old Garrett in season, Jones replied: "First of all, Jason Garrett is a good coach. He's also one of the hardest working coaches. He knows this team better than anybody. ... I'm glad to have him. He is the guy for the job."

Dallas are a game ahead of the Philadelphia Eagles in the race for the NFC East title and, despite recent results, Jones is still confident about the outlook for the Cowboys for the rest of the year.

"If I were leaving training camp today, I'd like to have this run that I’ve got right now, four games to get to the playoffs, as healthy as we are," Jones said.

"Get our act together relative to what we're doing on both sides of the ball and let's go. I feel pretty good about it."

The Cowboys face the Chicago Bears on Thursday before finishing the regular season with games against the Los Angeles Rams, Eagles and Washington Redskins.