Ron Rivera: My intent is to coach again 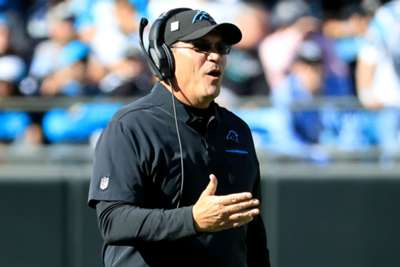 Ron Rivera has no plans to give up coaching and is confident he will soon get another opportunity in the NFL.

Rivera was relieved of his duties by the Carolina Panthers on Tuesday after nearly nine seasons at the helm following a run of just one win in six games that dropped their record to 5-7.

A two-time Coach of the Year winner, Rivera led the Panthers to Super Bowl 50 at the end of the 2015 season, in which they went 15-1. Carolina reached the playoffs four times under his stewardship.

The 57-year-old still believes he has more to give and told a farewell media conference on Wednesday: "My intent is to coach again. I love coaching.

When asked what his pitch would be to prospective new employers, Rivera said: "I've got the right kind of experience.

"Having gone through the things I've gone through, been where we've been, it gives me experience. It doesn't mean I'll be better than anybody else, but it gives me perspective.

In my press conference I forgot to thank the #media for the way you treated me & my family these past 9 years. You might have been critical, but always fair & I respect you for doing your job well! #iwillbeback

"At the end of the day it's production-based and if you don't produce then it's time to move on. I'll be honest, I'm kind of excited. I really am. I'm really looking forward to a lot of opportunities."

Looking back on his tenure with the Panthers, Rivera said: "My biggest regret is not winning the Super Bowl.

"I want to reemphasise: I'm proud I took over a 2-14 team and won back-to-back-to-back. See the emphasis? Won three in a row.