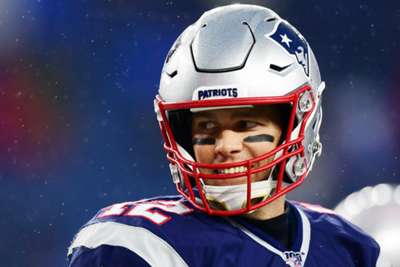 Patriots star Brady was limited in practice on Thursday, with a toe and right elbow issue hampering the veteran.

However, the 42-year-old – a six-time Super Bowl champion and four-time MVP in the NFL showpiece – made light of the injury report.

"That might be the first time my toe's ever been on the injury report. You know us Patriots," Brady told Westwood One Sports.

"We're pretty diligent about listing everything, so I guess we have to make mention of my toe now as well."

"Isn't there some HIPAA [Health Insurance Portability and Accountability Act] violation or something like that, when I start talking about all my injuries? I'm doing pretty good," Brady added of his elbow.

"At this time of the year, I'll take it. I'll take anything if I'm still able to go out there and feel like I can play my best. I'm feeling really good, really positive about this week. We have a really great challenge ahead of us."

Brady was speaking ahead of Sunday's showdown against the Chiefs (8-4), with the Patriots (10-2) looking to bounce back from last week's 28-22 loss to the Houston Texans.