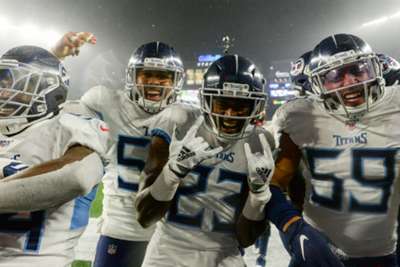 The Tennessee Titans will be hoping history repeats itself when they face the Baltimore Ravens after the San Francisco 49ers lock horns with the Minnesota Vikings in the NFL Divisional playoffs.

Mike Vrabel's Titans sensationally dethroned the New England Patriots with a 20-13 playoff victory last weekend and must defy the odds again to topple the Ravens.

All three postseason encounters between the Titans and the Ravens have been won by the road team, a record Tennessee will fancy their chances of maintaining after stunning the Patriots.

The 49ers host a Vikings side on a high after ending the New Orleans Saints' season, while the Kansas City Chiefs and Green Bay Packers have home advantage against the Houston Texans and Seattle Seahawks respectively.

We take a closer look at all the games using Stats Perform data.

- The two sides will meet in the postseason for the sixth time and first time since the 1997 Divisional Round, with the 49ers holding a 4-1 advantage.

- Minnesota won a first road playoff game since 2004 with a 26-20 overtime victory over New Orleans last week. The Vikings had gone 2-12 in their previous 14 road playoff games dating back to 1988.

- The 49ers have won at least one playoff game in 13 of their last 15 playoff appearances, most recently winning twice before losing to Seattle in the 2013 NFC Championship.

- Lamar Jackson set NFL records for carries (176) and rushing yards (1206) by a quarterback this season, while his 6.85 yards per carry was the highest in NFL history by a player in any position with at least 150 carries.

- The only previous postseason game between the teams saw the Chiefs win 30-0 at Houston in a 2015 Wild Card Game, the largest margin of victory in franchise postseason history.

- The Chiefs closed the regular season with a six-game winning streak; only the Ravens (12) won more games in a row ahead of the playoffs.

- Deshaun Watson completed 80 per cent of his passes (20-for-25), in the Wild Card defeat of the Buffalo Bills. That was the highest mark among starting quarterbacks last weekend, the top mark in Texans postseason history, and tied for second highest in any game in his career.

- The Packers have won two of their three playoff clashes with Seattle, but the Seahawks came out on top in their most recent encounter 28-22 in the 2014 NFC Championship match.

- Seattle defeated the Philadelphia Eagles 17-9 last weekend, improving to 8-1 on the road this season. They have never won multiple road games in a single postseason and the last team to do so was the 2013 49ers.