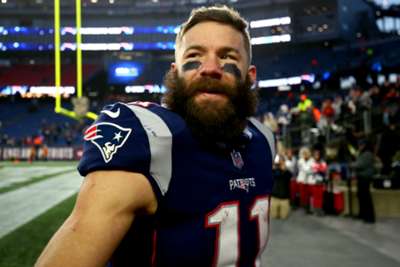 Julian Edelman was arrested for vandalism after jumping on a car in Beverly Hills, California, on Saturday, police have confirmed.

With the Patriots' season over, Edelman was in Los Angeles County while the Titans stunned the Baltimore Ravens, the AFC's top seed.

Edelman caused damage to a car after climbing onto the vehicle and will now appear in court in April after he was released on a citation.

"On Saturday, January 11, 2020, at approximately 9:00pm, Beverly Hills Police arrested Julian Edelman for vandalism after he jumped onto a driver's vehicle causing damage," the department said in a statement released to Omnisport.

"The vandalism occurred in the 200 block of North Beverly Drive.

"Edelman was released on a citation and scheduled to appear at the Airport Courthouse on April 13, 2020."

Edelman, a three-time champion with the Patriots, was the MVP in last season's Super Bowl LIII.

The 33-year-old played in each of New England's 16 regular season games in 2019, starting 13 times and scoring six touchdowns.

However, Edelman looked out of sorts heading into the surprise loss to Tennessee and is reportedly set for surgery in the offseason after battling injuries throughout the campaign.