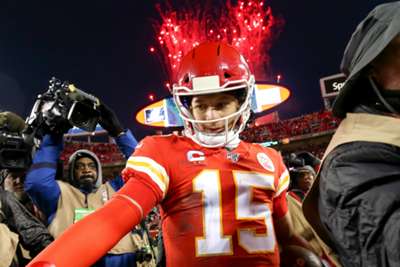 Kansas City Chiefs star and reigning MVP Patrick Mahomes proved he is the best quarterback in the NFL after leading an incredible comeback against the Houston Texans, according to team-mate Travis Kelce.

Mahomes became the first player in playoff history to throw for 300-plus yards, rush for 50-plus yards and throw five touchdowns in a game as the Chiefs erased a 24-0 deficit to beat the Texans 51-31 and move through to the AFC championship on Sunday.

The Chiefs quarterback was at the forefront of the biggest comeback in franchise history – Mahomes finishing 23 of 35 for 321 yards and five touchdowns, while he rushed for 53 on seven carries.

"Not anybody in Kansas City, I'll tell you that right now," Kelce told the NFL Network when asked if some forgot how good Mahomes was due to Lamar Jackson's exploits with the Baltimore Ravens this season. "Pat Mahomes is the best quarterback in the league, and he proved it today."

"WE COMING BACK!" @PatrickMahomes pic.twitter.com/7Q3aXpkxRa

Standing in the way of the Chiefs and a Super Bowl berth are the giant-slaying Tennessee Titans.

"Obviously we didn't start the way we wanted to, but all we were preaching -- offense, defense and special teams -- is let's do something special," Mahomes said. "Everybody's already counting us out, let's keep fighting and just go one play at a time, and we found a way. Obviously, this is a huge win and now we've got the AFC championship game at home."

Chiefs tight end Kelce, who had three TDs, added: "I've never been a part of a team like this, either, so it was, I guess, a perfect match there, after we went down.

"Just leaned on each other, circled the wagons, get a little bit tighter when things get a little rough and lean on your brother. And when in doubt make plays for your guy back there. 1-5 [Mahomes] got us going, 17 was the one that really sparked us there on the special teams and, you know what, this defense played their tails off all game."