He carried us on offense – Rodgers lauds Adams 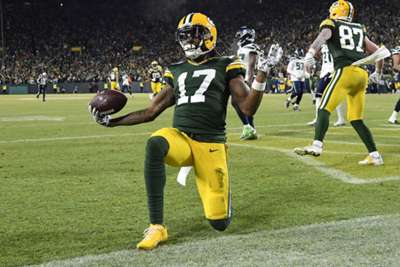 Aaron Rodgers praised the "incredible" Davante Adams after the Green Bay Packers held off the Seattle Seahawks in the NFL playoffs on Sunday.

Adams had 160 receiving yards and scored two touchdowns in the 28-23 win that sent the Packers into the NFC Championship Game.

Rodgers, who was 16 of 27 for 243 yards and the two TDs, praised the wide receiver's performance.

"He had an unbelievable night. He carried us on offense," the Packers star told Fox Sports.

"His route-running ability was incredible.

"We came up with a timely stop because Russ [Wilson, Seahawks QB] and their offense was pretty tough.

40-yard TD on the throw from @AaronRodgers12! #GoPackGo #NFLPlayoffs

Green Bay, who set up their win by taking a 21-3 half-time lead, moved into a clash with the San Francisco 49ers at Levi's Stadium.

Rodgers paid tribute to the 49ers, who were 13-3 during the regular season before overcoming the Minnesota Vikings on Saturday.

"We're going to enjoy this one first," he said.

"I think it's super special, a little extra special to get the ball to Jimmy [Graham] there on the last third down because he was in Seattle for a few years, but we'll enjoy this one tonight and we'll get onto San Francisco.

"They're a great football team, they've had a fantastic year. I think these are the two best teams in the NFC and we have to go out there and get a win."