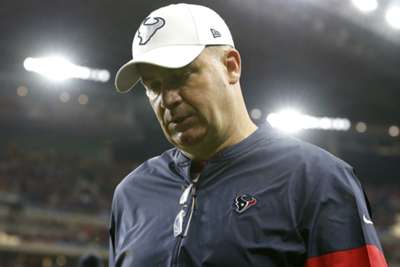 Deshaun Watson insisted Houston Texans head coach Bill O'Brien is the right man for the job, despite the team's stunning loss to the Kansas City Chiefs in the NFL playoffs.

The Texans blew a 24-0 lead in Kansas City as the red-hot Chiefs rallied to win 51-31 en route to the AFC Championship Game on Sunday.

Houston conceded 41 consecutive points, with the Chiefs becoming the first team in history to win a postseason game by at least 20 points after trailing by at least 20.

Texans quarterback Watson, though, stood by O'Brien – who has been in charge since 2014.

"There's no doubt," Watson told reporters when asked whether O'Brien is the right coach for the Texans. "I mean, you might have doubt, but there's no doubt. I mean, I love that man. I'm going to play hard for that man. Y'all can say whatever you want to say through all the media and all the writing, but as long as I'm at quarterback, he's cool with me.

"He's got my heart. He's going to get all of my 110 per cent every time I step on that field. So y'all can say whatever, but [I'll] always be rooting for that man and going to play hard for him."

“There is no way I’m getting discouraged for the future.”

The Texans entered the divisional-round contest having topped the Buffalo Bills in a wild-card clash – their second playoff win under O'Brien.

Houston also wrapped up their fourth AFC South crown in five seasons as they eyed a first conference championship appearance.

O'Brien said: "I feel like we are moving in the right direction. I think we did a lot of good things this year. Not enough, obviously. I feel good about where we are headed."