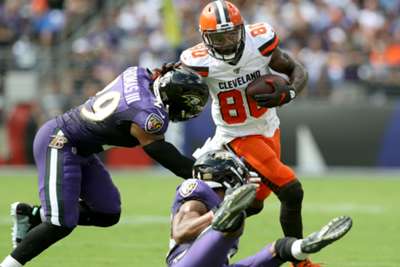 Cleveland Browns wide receiver Jarvis Landry has never missed a game in his six-year NFL career, and does not believe that streak will end, saying his recovery from hip surgery is "ahead of schedule".

Landry was saddled by a hip injury all of last season after getting injured in training camp.

Despite being slowed, he still managed to lead the Browns with 83 receptions, 1,174 receiving yards and six receiving touchdowns to earn a fifth Pro Bowl selection.

"Rehab process is going great," Landry said on Wednesday on a Zoom call from his home in Florida.

"It's just a little difficult obviously, just some of the modality type of things I've been doing that obviously with quarantine and everything I haven't been able to have access to. So that's kind of been the toughest part of it.

"Right now I'm a little bit ahead of schedule, but the most important thing right now is taking it day by day. I can't predict when exactly I'll be on the field, whether that's July, August or September. But obviously my return date is sometime in August."

Still crazy we never practiced this together and it still worked @bakermayfield let’s do it again https://t.co/8fyNK9mD8D

Landry originally considered against having surgery and gutting out another season playing with pain before opting to go under the knife following the Pro Bowl in February.

He said on Wednesday that having surgery was "absolutely" the right decision.

"It was something I knew I needed," the 27-year-old said. "I was going to try and put off and play the tough guy for one more year. But just understanding where I was, the things it was not allowing me to do, I did not want to be part of the reason for the team not having success."

Rehab from the surgery was expected to take six to eight months, which puts his availability for the 2020 season opener in question.

Landry, though, is motivated to extend his games played streak and sees himself being ready for training camp, when players are cleared to practice amid the coronavirus pandemic.

"That's one of the goals that I would set out for myself since I was a kid watching 'Monday Night Football'," he said.

"And it's still something that's in the back of my mind. Obviously I want to make sure that I'm going through this process the right way, too, and making sure that I'm healthy enough to be able to go out there and help the team win games and not hurt the team."