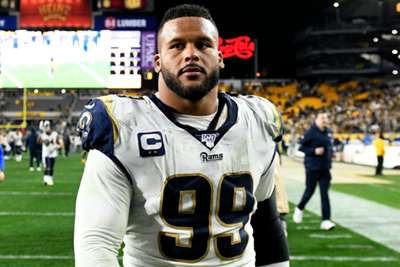 The Rams are scheduled to open their 2020 NFL campaign against the Dallas Cowboys at SoFi Stadium on September 13.

It remains to be seen if supporters will be allowed to attend games due to the COVID-19 crisis which has wreaked havoc globally, with teams starting to return to their facilities this week.

Rams defensive tackle and six-time Pro Bowler Donald is not a fan of playing behind closed doors.

"You need fans to play a game," Donald told reporters via a videoconference on Thursday. "I don't see how you could play a game without no fans, I feel like that takes out the excitement and the fun out of the game.

"I feel like the fans is what pick you up. The fans is what makes the game exciting. The fans will give you that extra juice when you're tired and fatigued, when you make that big play and you hear 80,000 fans going crazy. That just pumps you up."

Donald added: "You practice, and practice is practice. And then you prepare to play a game and be on a big stage and play in front of a crowd.

"Just no excitement [without fans]. It wouldn't be fun to me. I don't think it would be fun to play a football game without fans."