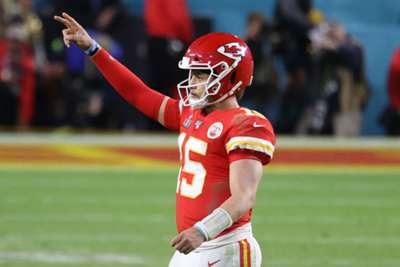 Patrick Mahomes is not due to hit the free agent market until 2022, but Kansas City Chiefs CEO Clark Hunt does not have any intention of allowing that to happen.

The Chiefs exercised Mahomes' fifth-year option in April so he will not be eligible to become a free agent until 2022.

The 24-year-old is scheduled to make $2.7million this upcoming season as he enters the final original year of his four-year, $16.4m rookie contract.

"The negotiations are something that we'll be getting into this summer," Hunt said on Thursday while participating in a Facebook Live event with Dallas radio station 105.3 The Fan.

"But what he has said and what we've said, both sides is, he wants to be a Kansas City Chief for life, and that's our mentality as well. We want him to play his entire career in Kansas City, and that's what we're going to be shooting for."

Mahomes is the first quarterback in league history to win league and Super Bowl MVP honours before his 25th birthday.

He won the 2018 MVP in his first season as a starter and joined Peyton Manning as the only quarterbacks to throw for at least 50 touchdowns and 5,000 yards in a single season.

Mahomes helped rally the Chiefs from double-digit deficits in each of their three playoff wins this past season, including a 31-20 victory over the San Francisco 49ers in the Super Bowl in February.