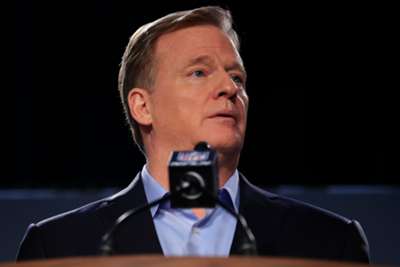 NFL commissioner Roger Goodell said "there remains an urgent need for action" amid protests across the United States following the death of George Floyd.

Floyd – an African-American man – died in Minneapolis after a police officer was filmed kneeling on his neck during an arrest on Monday.

Violent protests have broken out across the USA since Floyd's death, during which he was filmed crying out for help as he was handcuffed and pinned to the ground.

In a statement released by the NFL on Saturday, Goodell said: "The NFL family is greatly saddened by the tragic events across our country.

"The protesters' reactions to these incidents reflect the pain, anger and frustration that so many of us feel.

"Our deepest condolences go out to the family of Mr. George Floyd and to those who have lost loved ones, including the families of Ms. Breonna Taylor in Louisville, and Mr. Ahmaud Arbery, the cousin of Tracy Walker of the Detroit Lions.

"As current events dramatically underscore, there remains much more to do as a country and as a league. These tragedies inform the NFL's commitment and our ongoing efforts. There remains an urgent need for action.

"We recognise the power of our platform in communities and as part of the fabric of American society. We embrace that responsibility and are committed to continuing the important work to address these systemic issues together with our players, clubs and partners."