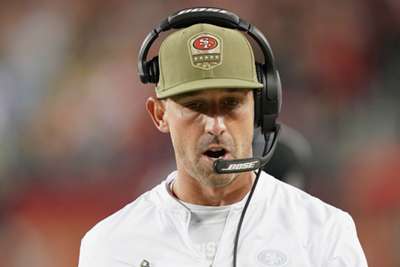 Terms of the agreement were not disclosed by the 49ers, but Shanahan reportedly signed a new six-year deal that will replace the remaining three years on his original contract – running through the 2025 season.

Shanahan helped engineer the best reversal of fortune in franchise history when he guided the 49ers to a 13-3 regular-season record and two more wins in the NFC playoffs to reach Super Bowl LIV last season.

San Francisco took a 10-point lead into the fourth quarter before the Kansas City Chiefs rallied for a 31-20 victory in the showpiece fixture.

The #49ers announced today that the team has signed head coach Kyle Shanahan to a multi-year contract extension.

With quarterback Jimmy Garoppolo limited to three games by a torn anterior cruciate ligament (ACL), the 49ers limped to a 4-12 record in 2018.

The nine-win improvement is tied for the third largest in a regular season in NFL history, surpassed only by the 1999 Indianapolis Colts and the 2008 Miami Dolphins. Both of those teams won 10 more games than the previous year.

Shanahan, the son of three-time Super Bowl champion coach Mike Shanahan, is 23-25 in three seasons since being hired as the 49ers' coach in February 2017.

The 40-year-old also led San Francisco to a four-win upgrade over the previous campaign during his first season in charge in 2017.

Prior to joining the 49ers, Shanahan served as the Atlanta Falcons' offensive co-ordinator and played a key role in the team reaching Super Bowl LI during the 2016 season.