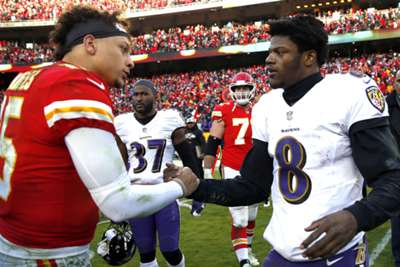 Lamar Jackson finds constant comparisons with Patrick Mahomes annoying but conceded he would love to have the Kansas City Chiefs star's arm strength.

In 2019, Jackson succeeded Mahomes as NFL MVP with both having won the award in their second season in the league.

Their similar trajectory as players and their presence as two of the premier quarterbacks as the league enters a new era at the position has seen 'Jackson or Mahomes' become a frequent source of debate.

Yet it is a discussion for which Baltimore Ravens signal-caller Jackson has little time.

Speaking on Bleacher Report's 'Take it There with Taylor Rooks', Jackson said of comparisons with Mahomes: "Yeah that's annoying. We play football.

"Two different teams. Ain't got nothing to do with each other. Like, we just play football. That's it."

Asked if there was any aspect of Mahomes' skill set he would like to possess, Jackson initially joked: "None. I ain't trying to be him. I'm my own player."

Lamar Jackson of the @Ravens is the second QB in NFL history to win 10 straight starts at age 22 or younger.

He joins Ben Roethlisberger, who won all 13 of his starts as a 22 year old in 2004.#RavensFlock

However, he then added: "To throw as far as him, I want that cannon. He got a cannon arm. I'd take that cannon."

Mahomes led the Chiefs to glory in Super Bowl LIV last season and was named MVP of the game after authoring a 31-20 win over the San Francisco 49ers. The Chiefs had trailed 20-10 with seven minutes left.

Jackson and the Ravens would have met Mahomes and the Chiefs in the AFC Championship Game had Baltimore not suffered a shock 28-12 loss to the Tennessee Titans in the Divisional Round.

Mahomes has won both games he and Jackson have contested in the NFL. The Chiefs beat the Ravens 33-28 in Week 3 last season, having also defeated Baltimore 27-24 in Week 14 of the 2018 campaign.