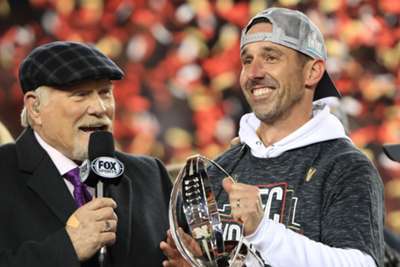 The San Francisco 49ers ensured Kyle Shanahan will be their head coach for the long term by signing him to a new contract on Monday.

Shanahan signed a fresh six-year deal with the 49ers and will remain at the helm through the 2025 season. His previous deal contracted him to the Niners through 2022.

Should he see out the entirety of his contract, Shanahan will become the second-longest tenured head coach behind the legendary Bill Walsh.

The Niners' decision to extend Shanahan's stay follows a 2019 season that saw him lead the 49ers to Super Bowl LIV, in which they suffered a dramatic defeat to the Kansas City Chiefs.

As the Stats Perform data shows, Shanahan has authored one of the more impressive turnarounds in NFL history, making it no surprise that the 49ers have made sure they will not be losing his services any time soon.

The #49ers announced today that the team has signed head coach Kyle Shanahan to a multi-year contract extension.

San Francisco's 2018 performance was heavily impacted by the torn ACL quarterback Jimmy Garoppolo suffered early in the season, but the upturn they enjoyed was still startling.

Indeed, their nine-win improvement was the largest in the history of the 49ers franchise. San Francisco became one of just 10 teams in NFL history to improve by nine wins from one year to the next.

Only two teams, the 2008 Miami Dolphins and the 1999 Indianapolis Colts, have bettered their win tally by 10 from the previous campaign.

Shanahan is widely regarded for his acumen as an offensive play-caller and he has had a transformative impact on San Francisco's attack.

In the two seasons before he took over, 2015 and 2016, the Niners finished 32nd and 27th in points per game. They were 31st in total yards per game in each of those seasons.

The influence of Shanahan was quickly felt in a 2017 campaign that saw the Niners go 6-10.

Thank you and congratulations to the @49ers for an incredible season. #GoNiners pic.twitter.com/sRcuPb23Sm

They were 20th in points per game and 12th in yards per game, with their revival in both categories undoubtedly impacted by the October trade for Garoppolo, who led the 49ers on a five-game winning streak to end the year.

However, with their quarterback available for a full season in 2019, the Niners joined the league's elite in both metrics. San Francisco's tally of 29.9 points per game was good enough for second in the league, while the 49ers were fourth in yards per game (381.1) in a year that saw them make history in a variety of fashions.

By progressing to the Super Bowl, San Francisco became the third team to do so after four consecutive losing seasons, following in the footsteps of the 1981 49ers and 1999 St. Louis Rams.

Additionally, the Niners were only the second team to contest the season-ending showpiece having lost 12 games in the prior campaign, again replicating the 1999 Rams.

Dominant on both sides of the ball, the 49ers finished in the top five on offense and defense for the first time since 1995.

Offensively, their success was built largely on a near unstoppable running attack. Three 49ers running backs went over 500 yards rushing for the season, marking the first time the Niners achieved that feat since 1954.

It’s only right we post all four of @RMos_8Ball’s NFC Championship TDs. pic.twitter.com/8cM70cqpmR

When passing the ball, the Niners did an excellent job of spreading it around and finished the season with 13 players catching a touchdown, tying an NFL record.

The 49ers kept the bulk of their Super Bowl team around this offseason and, with Shanahan contracted for at least another six seasons, there is reason to believe they will spend much of this decade threatening more NFL milestones.