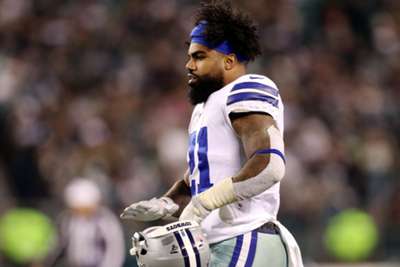 Dallas Cowboys star running back Ezekiel Elliott said his recovery from a coronavirus diagnosis has been going well and he expects to resume working out soon.

Reports surfaced last week that Elliott was among a number of Cowboys players who had tested positive for COVID-19 and was in self-quarantine at his home. The two-time NFL rushing champion said in an interview on his Twitch channel he experienced some minor symptoms that have since subsided.

"I would say maybe one or two days where I felt symptoms, and even then, it wasn't too bad," he said. "I had a cough and a little bit of shortness of breath. Now I feel good, I feel normal."

Elliott added he plans to get retested next week to be cleared to resume individual workouts, which the Cowboys have had to conduct virtually along with the rest of the NFL under the league's offseason safety protocol.

He said: "I could have gotten retested this week; I just decided it won't hurt just to wait another week and give myself more time to rest up. But I feel good."

Elliott's mother said on Twitter her son was around someone who tested positive three days after they met. Both she and Elliott's sister were also in the presence of that person, but both returned negative tests.

The four-year veteran is expected to be fully cleared in time for training camp, which the NFL still hopes to allow teams to begin on time in late July while it continues to monitor the COVID-19 situation.