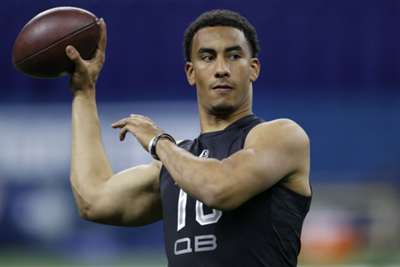 The Packers stunned the NFL world when they traded up to select Utah State's Love in the first round of April's draft despite seemingly being set at the position for the foreseeable future with likely Hall of Famer Aaron Rodgers.

While Love is expected to bide his time until the Packers move on from 36-year-old Rodgers, Favre sees a way for Green Bay to get him in on offensives series early in his career.

Packers legend Favre highlighted Drew Brees' versatile deputy Hill, who the Saints line up as a quarterback, running back, wide receiver and tight end, as well as on special teams, as an example of how Love's skill set can be utilised.

"I think there's ways to incorporate it much like Taysom Hill with the Saints," Favre told TMZ.

"Use him as a halfback, a halfback pass, but occasionally let him run it just to show that you'll do that. Something like that."

Rodgers was in Love's shoes when he arrived in Green Bay as a first-round pick that had to wait until his fourth year before taking over from Favre as the starter.

Favre was frosty to Rodgers' arrival at first but the two have developed a friendship in recent years, and the ex-Packers QB has spoken with the current incumbent about the franchise drafting his heir apparent having only been one game from the Super Bowl last season.

"I think he's doing very well with it," Favre added.

"My understanding is he reached out to the young quarterback and they spoke and it was good. I think that's a huge plus and a big step in the right direction for Aaron.

"With my discussions with Aaron, I never got the sense that he was upset that they had signed a quarterback, but more so that they didn't get immediate help.

"It just sends the wrong message. I'm not saying that it's the wrong pick, but based on what you're trying to do right now, it doesn't necessarily help."