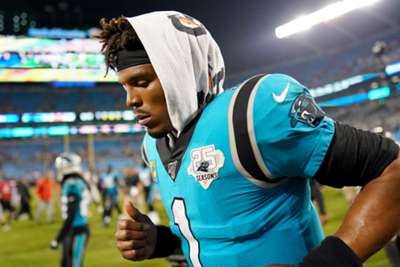 Cam Newton has agreed a one-year deal with the New England Patriots, according to reports.

Newton is set to try and help the Patriots fill the void left by legendary QB Tom Brady, who departed New England for the Tampa Bay Buccaneers via free agency.

The 31-year-old Newton was released by the Carolina Panthers in March, having spent nine seasons in Charlotte and thrown for 29,041 yards, 182 touchdowns and 108 interceptions.

Newton was the first overall pick in the 2011 NFL Draft, selected by the Panthers.

He won the MVP in the 2015 season, which saw him lead the Panthers to Super Bowl 50, where they lost to the Denver Broncos.

The Panthers made the playoffs in four of Newton's nine seasons with the team.

However, in recent years, Newton has been hindered by injuries.

Newton battled a shoulder injury in 2018, with a once-promising campaign derailed as the Panthers lost seven of their last eight games to finish 7-9.

He played only two games in 2019, losing both, with Lisfranc fracture forcing him to watch the rest of a 5-11 season from the sideline.