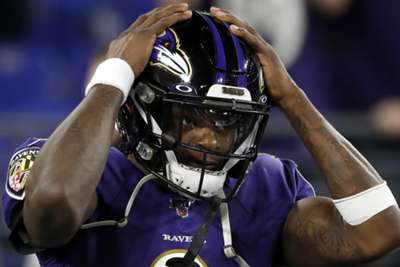 Lamar Jackson's focus is on winning the Super Bowl before he considers negotiating for a contract to rival that given to Patrick Mahomes.

Baltimore Ravens quarterback Jackson followed Mahomes in winning the MVP award in his second season in the NFL in 2019.

But it was the Kansas City Chiefs superstar who was celebrating come the end of the year after leading his team to a Super Bowl victory over the San Francisco 49ers in Miami.

Mahomes was subsequently rewarded with a record 10-year extension worth $503million, the largest in North American professional sports history.

Jackson would appear likely to be set for similarly lucrative improved terms, but he insists he first must prove himself and deliver a ring.

"My reaction is that I've just got to win a Super Bowl," Jackson told reporters. "I don't really focus on what he has going on, because I've still got to prove myself.

"When that time comes, we can negotiate after a Super Bowl. But until then, I'm focused on winning right now."

.@Lj_era8 opens his press conference with his condolences to Mo Gaba's family. pic.twitter.com/XnNofMtAyJ

The Ravens fell to a surprise loss to the Tennessee Titans in the playoffs, having been beaten by the Los Angeles Chargers the previous year, leaving Jackson still waiting on a first postseason win.

There is certainly no complacency heading into the new season, however, as the 23-year-old refuses to look beyond Baltimore's season opener against the Cleveland Browns.

"I can't really dwell on the playoffs, because those games were my rookie season, where people didn't even expect us to go to the playoffs at all, and last year, where none of us expected to lose.

"They [the Titans] came out and played well. We didn't.

"But now we've just got to focus on the Cleveland Browns. When we get back to the playoffs, we'll go from there."