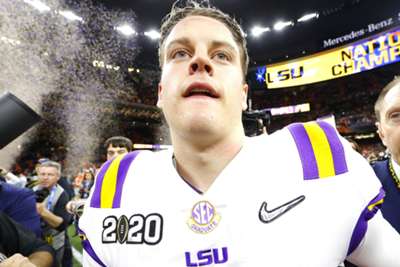 Cincinnati Bengals head coach Zac Taylor said number one pick Joe Burrow will have every opportunity to start for the NFL team.

Burrow was selected with the top pick in April's NFL Draft and the 23-year-old has agreed to terms on a four-year, $36million contract.

All eyes are on Burrow, who will be tasked with trying to turn around Cincinnati's fortunes – the Bengals have not won a playoff game in three decades.

After moving on from veteran QB Andy Dalton, Taylor insisted the Bengals have faith in Burrow.

"We're going to put a lot on Joe right out of the gate," Taylor told a news conference on Wednesday.

"Obviously we have weeks to sort out who's starting and all that good stuff, but Joe's going to walk in and take the first snaps at quarterback. He's prepared for that."

"And so he's going to do everything he can to put himself in a position to be successful. I trust that."

The Bengals will open their season against the Los Angeles Chargers on September 13.

Burrow won the Heisman Trophy last season having led LSU to a national title, breaking numerous records along the way, including throwing 60 touchdowns – an all-time leading mark in the NCAA.